David is a recovering corporate executive who writes about sci-fi and spies—sometimes together.

He earned a Bachelor of Science in Honors English from the United States Naval Academy. (That’s not a typo. He’s probably the only English major you’ll ever meet who took multiple semesters of calculus, physics, chemistry, electrical engineering, naval architecture and weapons systems just so he could get to read some Shakespeare. It was totally worth it.) After graduation, he chased the Russians in a nuclear-powered submarine, but when the Cold War ended, he traded in his officer’s commission for a job in high tech.

David is the creator of the sci-fi series, The Dream Guild Chronicles, and numerous pieces of short fiction. In his spare time, he writes thrillers with a retired naval intelligence officer who has some truly fabulous sea stories. Their first co-authored novel, Weapons of Mass Deception, looks less like fiction every time he opens the newspaper.

Find out more and download a free Starter Library at www.davidbruns.com 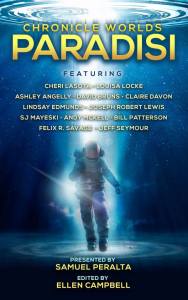 “A Touch of Deceit”
in Chronicle Worlds: Paradisi

Rookie agent Gideon Thorndike is caught between two worlds. From his Founder father, he received wealth and education, from his Original mother a unique psychic ability. Now, on his first murder investigation, Gideon finds that his lonely upbringing is just what he needs to crack the case wide open.

And what he finds forces him to pick a side.