In the footsteps of Hemingway and London, Andy Bunch is an adventure writer. He has built a church in Mexico, sung for his supper in Canada, taught Archery in Alaska and studied British history in Great Britain. He’s trained in martial arts and once spent a week in the woods with only a knife, flint, and black-plastic.

Saber and Science: A Novella 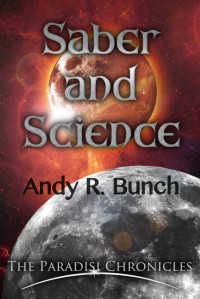 At an outpost on Tenebra, the farthest planet of the Paradisi Solar System, a cargo/passenger shuttle on a routine transport diverts into the badlands and crash-lands. Despite the likelihood that the space vessel landed intact, High Command orders that no one attempt a rescue. Constable Paladini is a New Eden citizen in good standing, and a shirt tail relative of one of the powerful Ten Families. He’s never broken a law or disobeyed orders in his life, but he’s never been ordered to stand down while people slowly suffocated in Tenebra’s thin atmosphere, or worse, get eaten by OGRs.

Paladini must break a law to attempt a rescue, so he must recruit a team of outlaws to assist him, and with time of the essence he must take what he can get. A group of quasi-criminals take up his challenge, overtly more interested in salvage than in saving lives, but Paladini can live with that. Secretly, each has their own reason to go and Paladini finds them increasingly difficult to lead as they travel farther from the outpost. If this group of wildly different individuals don’t learn to work together they’ll fail the rescue, or worse get eaten by OGRs.

Lt. Declyn, Paladini’s second in command, receives orders to pursue Paladini into the badlands and stop him by any means. It’s a task he’s especially suited for and an opportunity he relishes.

Pursued by Declyn and dodging OGRs, the group manages to find the wrong wrecked ship, then the right ship, empty. Only when one of their own is captured does the team pull together, but is it too late?

Buy on Amazon | Buy on Nook | Buy on Kobo